Call us Offer
You are here: Home Blog Explore the attractions of Marbella and check, what is worth seeing here
28/02/2022

Explore the attractions of Marbella and check, what is worth seeing here

When planning a trip to the south of Spain, you are probably wondering what cities to visit. One of the popular tourist destinations of Andalusia is Marbella. However, the main associations that come to mind in the context of this city are luxury, glamour and big money. You are probably wondering if there is anything to see in Marbella at all? Are Marbella's tourist attractions limited to expensive restaurants and trendy clubs only?

Following the simplest of associations, it might seem that Marbella only offers attractions to the wealthy. However, behind the material wealth visible to the naked eye, behind the Gucci, Dior or Prada boutiques and horrendously expensive cars that park in front of them, there is an intangible cultural and natural wealth. To discover them, it is enough to plunge deeper into the city. It will turn out then that… yes, there is something to see in Marbella. And these are not only the beautiful yachts in Puerto Banus and luxury villas. This is only one side of the city, the more "glamorous" one. On the other hand, Marbella delights with numerous monuments, works of art and charming, quiet nooks steeped in history, accessible to everyone, regardless of the thickness of the wallet. There are so many attractions for children and adults in Marbella that it will be difficult for you to decide where to start. 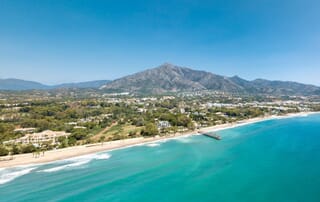 So what is worth seeing in Marbella?

Marbella – visiting Casco Antiguo, the old part of the city

While in Marbella, you should start your sightseeing in the old town, because it boasts one of the most beautiful old towns on the Costa del Sol. "Casco Antiguo" consists of two historic districts: Barrio Alto, which extends to the north, and Barrio Nuevo, which is situated in the eastern part of the center. The old town delights with the multitude of monuments, churches, museums and squares. The whitewashed buildings, charming cobbled streets, fragrant orange trees, bougainvillea flowers surrounding the houses and blue pots with bright flowers on the buildings are also delightful.

You can spend whole days walking freely around the old town through its narrow streets and not get bored with it. You can discover more attractions of Marbella at every step. The most beautiful streets are:

The last one leads directly to Plaza de Los Naranjos, a lively square in the heart of the old town. 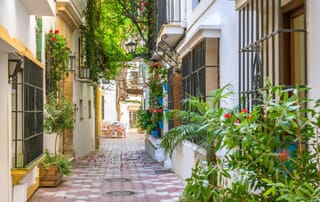 This is the beating heart of Marbella's old town. The square is usually filled with people eating tapas in the numerous restaurants, enjoying colorful drinks and the scent of orange trees.

Here you will find:

The present seat of the town hall, built in 1572, and expanded in the 17th century. This Renaissance building has a balcony façade which is a fine example of Spanish architecture.

Interesting fact: although the square dates back to 1485, when the Catholic monarchs took the city from the Moors, orange trees were planted here only in 1941. 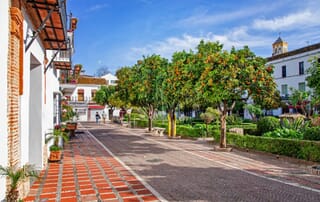 The oldest religious building in the city, built earlier than the Orange Square itself, where it stands. It looks a bit different than the neighboring architectural ensemble.

St. John chapel from the 16th century. It was built by Catholic monarchs in the old building of the former royal hospital.

Chapel built in the 15th century and extended in the 18th century. The main facade above the entrance is covered with a stone coating, while the rest of the building is traditionally plastered, which is a characteristic feature of Andalusia. The dome of the church is covered with a ceramic mosaic.

Church of Our Lady of the Incarnation, one of the tallest buildings not only in Marbella, but in the whole of Andalusia. The construction of the church dates back to the 15th-16th centuries. The facade looks simple but elegant, the rococo entrance is carved in stone ocher. Inside, you can see frescoes depicting the 12 apostles. Even from a distance, the tall, rectangular bell tower, 50 meters high, topped with a mosaic pyramid roof and an angel-shaped weather vane, stands out.

On the outskirts of the old town there are well-preserved ruins of an Arab fortress wall. The Muralla del Castillo is the remains of the 10th-century city walls, built during the Moorish rule. Previously, the walls occupied over 90,000 m2. Most of them have been destroyed.

Restored remains of the old Moorish Marbella Castle built in the 9th or early 10th century. The castle was built with materials from an earlier Roman construction, as evidenced both by the large stone blocks that make up the lower parts of the building, and by the presence of three Ionic capitals.
The castle, which was officially declared a cultural heritage site in 1949, today retains one of its towers – the hole at its top is evidence of a battle fought by Catholic monarchs to capture the city.

Historic building from 1552. It has a stone facade decorated with a balcony supported by three arcades, combining Gothic and Renaissance elements. The Moorish-style ceiling is decorated with frescoes. 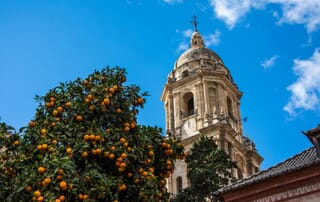 Opened in 2000, it has one of the most important collections of contemporary Latin American art in Europe. You can admire works by artists such as Marc Chagall, Joan Miró, Salvador Dalí, Giorgio de Chirico and many others.

Existing since 1992, it boasts a rich collection of prints by 20th-century artists. Among them are Pablo Picasso, Joan Miró, Salvador Dalí. You can also visit an exhibition room for teaching engraving techniques. The museum is housed within the historic walls of the former Bazán hospital.

Former Roman complex of houses and villas from the 1st century AD. Today it is an archaeological site between Marbella and Puerto Banus, discovered in 1961. It is known for its stunning, well-preserved mosaic floors, including the famous Medusa mosaic, and the many mosaics depicting religious paintings and cooking tools used in the early Roman times.

The park extends over 2 km with an area of ​​18,000 m2 with native and exotic vegetation. There are two artificial ponds, one of which is home to turtles, sports fields and a playground for children. A characteristic feature is the rope bridge that divides the park in half.

A small park located in the center of Marbella a few meters from the marina. On its premises, there is a playground for children and a cafe. Concerts and many other attractions are organized there throughout the year.

3-hectare forest park with native vegetation located 20 minutes’ walk from the historic center of Marbella. There you will find barbecues, tables and benches, it is the perfect place for a picnic and spending a family day in the heart of the city.

Probably the most famous park in the city, located three minutes' walk from Marbella's old town. It is close to the marina and the promenade to which the famous Avenida del Mar leads. In Parque de Alameda you will find the impressive Fuente de la Virgen del Rocio fountain and characteristic benches covered with painted tiles. Each bench tells a story and, interestingly, no two benches are alike.

The avenue that was once part of the Alameda Park. Since the 90s, it has turned into a unique place for walking. Its attraction are the original bronze sculptures by Salvador Dalí.

From Avenida del Mar, you can go down the stairs and continue your walk along the promenade.

Visiting Marbella cannot be done without walking along the coast. It takes less than 10 minutes to get from Plaza de los Naranjos to Paseo Maritimo, the long promenade that is part of the Senda Litoral project. The Paseo Maritimo offers great views of the sea and several popular beaches. There are also many bars and restaurants, as well as hundreds of moored boats and huge yachts, flashy cars and designer stores.

The beaches of Marbella

Marbella's tourist attractions are also wonderful beaches. Along the 27 kilometers of the quay within Marbella, there are over 15 of them. The most popular are: Playa Venus, Playa del Cable, Playa Real de Zaragoza, Mistral or Playa de Cabopino, next to which there is a picturesque tiny marina and the Las Dunas de Artola nature park. 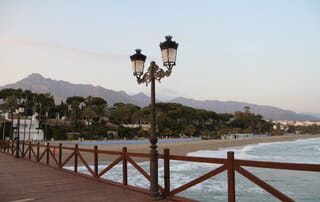 What is worth seeing in Marbella while being here with children is not only the monuments, museums and parks equipped with playgrounds. There are also a few other places, such as beaches with sailing lessons for children and great for water sports. Particularly attractive and interesting for children, however, is Funny Beach with a go-kart track, trampolines, a swimming pool, bicycles, electric cars and video games.

There are also plenty of attractions for children in the Marbella area. Less than an hour's drive from Marbella, there are several water parks where kids can have fun, such as Waterfun Park Acuático, Parques Acuáticos Estepona and Aquamijas. In the Elviria district, just a 10-minute drive from Marbella city center, is the Aventura Amazonia Rope Park.

Children will also enjoy a cruise. Depending on your needs, you can rent a boat with a helmsman or go on a dolphin watching tour. If you rent a boat, you can even go to Gibraltar or Morocco.

To sum up the attractions of Marbella

Marbella is very popular for its beaches, elegant nightlife and party scene. What many people do not realize, however, is that this seaside town is steeped in history to the core, and the old town is as beautiful as the beaches – which is worth seeing in Marbella with your own eyes.

There is a lot to be seen in Marbella. We have enough attractions for everyone, so if you are thinking of going to the south coast of Spain or planning a trip to Andalusia, be sure to add this city to your itinerary.

If you want to receive news from the Spanish property market please type in your e-mail address below.