You're here: Home Blog Benalmádena – discover one of the largest and most popular resorts in Spain

Strolling through the labyrinth of narrow and cobbled streets in a typical Andalusian mountain landscape, where the immaculate white of the houses is broken only by green vegetation and colorful flowers hanging from the balconies. Getting to know the corners of the port and lounging on the beaches in full sun. Strolling through the city squares, where you can taste tapas or relax in small cafes. Benalmádena has this and much more to offer – a popular resort on the Costa del Sol, where the memories of the great civilizations that ruled it, from the Roman Empire to the medieval Muslims, are still alive.

Where is Benalmádena in Spain?

Benalmádena is located in southern Spain, between Fuengirola and Malaga, in the vicinity of Torremolinos. It is one of the largest and most important tourist centers on the Costa del Sol.

Benalmádena can be reached by car along the coastal road N-340, the A-7 motorway or by train. Malaga Airport is 15 minutes from Arroyo de la Miel.

Curio:
Benalmádena entered the international tourist map during the tourist boom of the 1960s. Although it is currently inhabited by about 45,000 people, in the peak of the summer season, the population reaches even 60,000.. 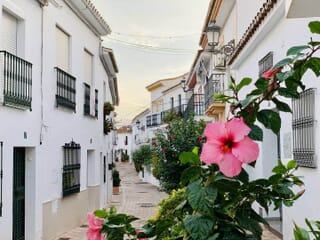 The peaceful nature of Andalusian mountain towns, the diverse and modern hotel industry, countless bars, pubs, discos, cultural centers, entertainment for children and adults –Benalmádena has it all. It is an attractive place for visitors and a permanent point not only for tourists looking for a few days of fun, but also a place for meetings and scientific or business conferences.

Curio:
Food in Benalmádena is not the most expensive, a glass of wine can cost 2 euros, and if you order food the Spanish way to share it with your friends, you will probably only pay around 10 euros per person 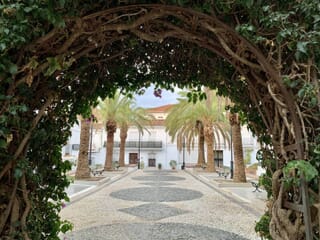 One of the great charms of the city is also its history. Inhabited by people for 20,000 years, Benalmádena Pueblo offers an insight into the history written in its streets, so different from the one we are writing today.

The origins of Benalmádena go far back to the times of the Phoenicians, who first settled in its area, and then the Romans. However, the greatest flourishing of the city fell on the period of Arab domination – Benalmádena was then an important place due to silver mines. The name itself refers to the mine – it is of Muslim origin and means: "sons of the mine". However, not only the mines, but also the location of the castle made Benalmádena a strategic place to defend Málaga during the Reconquista. 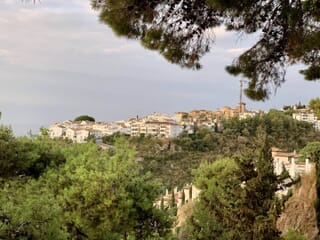 What to see in Benalmádena – our recommendations

Being in Benalmádena Costa del Sol can be associated mainly with entertainment on the beach, hotel swimming pools or nightlife. Meanwhile, this region also abounds in beautiful places, well-preserved monuments and buildings of sacral architecture. Things to do in Benalmádena:

It is located in the center of Benalmádena Pueblo. It is worth seeing the peculiar statue of the girl from Benalmádena (known as la Niña de Benalmádena) made in 1968 by Jaime Pimentel, a sculptor from Málaga. The twin statue of Manneken Pis has been in Brussels since 1991. 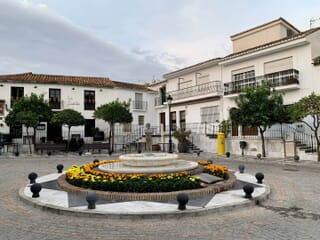 Three towers remain along the coast of Benalmádena. They were erected during the Reconquista by the former Christians as watch towers and defensive towers against Muslim invasions. These towers gave their names to three famous estates: Torre Bermeja, Torre Quebrada and Torre Muelle.

Colomares Castle is one of the most unique castles in the world. Unlike most castles, it was neither built 1,000 years ago nor was it the home of any royal family. The castle is not even 30 years old yet. It was built in the years 1987 – 1994 by the surgeon Esteban Martin, who spent a fortune to make his dream come true – paying tribute to Christopher Columbus by erecting an exceptionally original monument to him, occupying 1500 square meters.

The castle is a mixture of different artistic styles: Byzantine, Romantic, Gothic and Mudejar. What particularly impresses in it are the fantastic stained glass windows of great value, but also... the world's smallest chapel, which thanks to the area of ​​1.6 sq m. was listed in the Guinness Book of Records. The castle and its gardens are open to visitors.

Not much older than Colomares Castle is Bil-Bil Castle. Its creation dates back to 1927, when it was built by the Hermann family, but unfortunately, due to the Spanish Civil War, it was never inhabited. Since 1981, the castle belongs to the city and serves as a place for public events: lectures, cultural exhibitions or weddings. The magical atmosphere prevailing in it is certainly influenced by the fact that it looks as if it came straight from Marrakesh – built in the Arabic style of red stone and decorated glazed ceramic tiles, surrounded by gardens and fountains and located right by the sea – it gives you the opportunity to admire spectacular sunsets.

Located in the gardens of Jardines del Muro, the oldest church in the city, built in the 17th century and renovated in 1960. Its whitewashed walls perfectly fit into the atmosphere of Benalmádena Pueblo, and the tile mosaic beautifully decorates its facade. The church has three naves separated by circular arches. It offers a wonderful view of the city skyline. 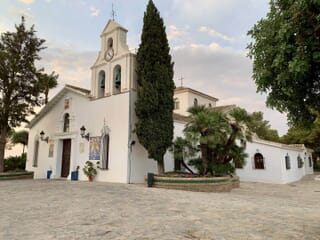 It is the highest stupa in all of Europe. It is 33 meters high and its top can be seen from Fuengirola, 10 km away. It was opened in 2003. The oriental building was built on a square plan with a side length of 25 m, made of white stone and finished with a golden cone. Inside, there is a large meditation hall with an area of ​​over 100 square meters.

The Museum of Pre-Columbian Art was founded in 1970 by the Mexican archaeologist and painter Felipe Orlando. You can see about 450 exhibits, e.g. from Mexico, Honduras, Nicaragua, El Salvador, Panama, Costa Rica and Santo Domingo. The museum also has 62 exhibits from the Neolithic period, most of which were discovered in Benalmádena.

After intensive sightseeing, you can indulge in rest, entertainment or recreational activities in the fresh air:

Since 1982, Puerto Marina has been a lively tourist and business showcase of the Costa del Sol and its economic locomotive. It is here that there are over 1,000 berths for the most expensive yachts that come from all over the world, about 200 shops, exclusive restaurants, bars, nightclubs, as well as luxury real estate, penthouses and apartment complexes designed to bring out what the most beautiful in the region. The architecture here combines Arab, Andalusian and Mediterranean elements. Life goes on here both day and night, guaranteeing fun at the highest level.

Puerto Marina in Benalmádena is considered by many to be one of the most beautiful marinas, in the 1990s it won the awards for the Best Marina in the World according to experts in the fields of architecture, business, gastronomy and recreation.

An interactive aquarium that takes you to underwater marine life and introduces you to the world of aquatic animals. You can see here, among others: colorful fish, sharks, sea turtles, rays, otters, piranhas or octopuses and crustaceans, take part in their feeding or games and activities for children.

The world of Tivoli

The first amusement park in Benalmádena, opened in 1972, and one of the oldest amusement parks in the world. For years, it has been providing adrenaline-pumping entertainment for vacationers and residents. Whole families will have a nice time here, taking advantage of about 40 attractions, including the famous roller coaster or Ferris wheel.

A cable car trip is the perfect opportunity to admire the beauty of the Costa del Sol from above. Falconry shows are an additional attraction in summer. The funicular takes about 15 minutes to reach the top of Mount Calamorro from sea level.

Benalmádena is much more than just going to the beach and sunbathing, although the beaches here are as good as those of other resorts. This is one of the best cities to visit on the Costa del Sol – it offers many attractions for everyone: families with children, couples, seniors and singles, regardless of age or interests.

For the beautiful photos you see in this post, thank you: Adam & Adam!

Benahavis – discover the jewel of the Costa del Sol