You're here: Home Blog Estepona – one of the most beautiful towns in Andalusia

Estepona – one of the most beautiful towns in Andalusia

Located in the center of the Costa del Sol, near loud, modern resorts, Estepona has remained free of the typical commercial tourist face and is the most Spanish town on the southern coast. Despite this, it is visited by thousands of people curious about its natural character. So if you want to check what Spain is really like, Estepona is the perfect destination. The old part of the city has retained its old charm, and walking around it gives the impression that time has gone back several dozen years.

In the 1960s, Estepona was still a small fishing village. Since then, however, it has developed into one of the largest cities on the Costa del Sol with a 21-kilometer coastline. It is famous for its colorful flowers on the streets, beautiful beaches, numerous cafes and tapas bars serving traditional Spanish delicacies. In addition, the weather in Estepona does not disappoint. There are about 325 sunny days a year, which is more than the average for this region. The local climate combined with the cool breeze from the Mediterranean Sea allows you to spend a fantastic time here, actively exploring the city or lazily relaxing on the spectacular beaches. 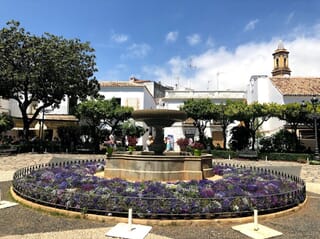 What part of Spain is Estepona in?

Estepona is located in the Andalusia region of Spain, in the western part of the Costa del Sol, in a valley at the foot of the Sierra Bermeja. Málaga is 90 km away. 30 km from Marbella and 50 km from Gibraltar.

From Malaga airport, the easiest and fastest way to get here is by car – the journey takes about an hour. Estepona is also easily accessible by bus. Depending on the type of bus, the trip from the airport can take an hour or two. It takes around 30 minutes from Marbella and around 90 minutes from La Línea de la Concepción, right on the border with Gibraltar. Driving to Estepona along the coast is a great way to experience the Costa del Sol.

When you think "Estepona", Spain appears exceptionally colorful. Estepona is called the garden of the Costa del Sol and this term has certainly not been given to it exaggeratedly. The richness of jasmine, green parks and tourist trails full of flowers and palm trees, charming squares full of orange trees. In addition, thousands of colorful pots hanging everywhere along the cobbled streets of the old town introduce the atmosphere of a typical Andalusian town. The contrast between the white houses and the vibrant colors of the plants is delightful.

Curio: You don't have to be extremely observant to notice that each street in Estepona has its own color scheme – each one is decorated with a different color of pots!

As befits the Spanish capital of flowers, one of the greatest attractions of Estepona is the opportunity to watch the beautiful lush vegetation blooming in the urban space and botanical gardens.

The orchidarium attracts attention even before entering. It is a fascinating, modern building with three distinctive glass domes, somewhat surprising against the backdrop of Estepona's traditional architecture.

Inside, the building is equally impressive. The unique way of exposing plants is breathtaking: vertical flower gardens have been composed in such a way that you can admire their flowering at any time of the year. The spectacular collection of the orchidarium includes over 5,000 species of plants and over 1,300 species of orchids (the most in Europe). The orchids were provided with appropriate growth conditions, imitating the atmosphere of a tropical rainforest. The tour of the orchid garden is made even more interesting by the three waterfalls inside the building.

The orchidarium is open from Tuesday to Sunday. Admission on presentation of a ticket: 3 euros for a normal ticket, 1 euro for a discounted ticket.
More information can be found at: http://www.orchidariumestepona.com/

Parque del Calvario, Estepona's largest park, is just a 5-minute walk from the orchidarium. It is sometimes called a secret garden and is distinguished by the greatest botanical diversity in the city. At its heart is a pond with a waterfall, fountains and geysers. Children can have fun on the playground here, and adults can take a breath, enjoying a piece of nature in the city center.

The Ermita del Calvario is also worth seeing in the park. The building was built in 1829 and was originally a retreat for lepers. From 1875 it served as a sacral building. Destroyed during the Civil War, it was restored to its former glory in 1936 and restored in 2003.

As with other towns on the Mediterranean coast, the beginnings of Estepona date back to the time of the Phoenicians. The history here dates back to the 4th century. The city flourished in Roman times. The 8th century is the time of Arab domination which ended in the 15th century. Traces of history are visible in the city to this day and can be seen, among others, in architecture and monuments.

The historic center of the city, known as the Centro Historico, is one of the prettiest on the Costa del Sol and evokes an idyllic memory of traditional Andalusian life. Currently, the streets of the Old Town are mostly free of car traffic, which is conducive to free walking, visiting monuments and resting in squares in restaurants and bars in the shade of orange trees.

History is visible here at every step. It is worth seeing in such places as Plaza de las Flores, Castillo de San Luis and Plaza del Reloj with the Reloj tower.

Plaza de las Flores is the main square of Estepona. With whitewashed houses, planted with orange trees, it is located in the Old Town. In its center there is a fountain decorated with flowers, and around it numerous gardens where you can taste delicious Spanish tapas.

Just 150 meters from Plaza de las Flores, there are the ruins of the Castillo de San Luis - a 15th-century castle, erected after the Moors were driven out of Estepona in 1457 on the ruins of an Arab building. Although the ruins are not impressive, fragments of the walls have survived and can be visited.

The Torre del Reloj, or clock tower, is one of the city's most recognizable landmarks and one of the most important Moorish monuments in Estepona. The tower is located in Plaza del Reloj, or Clock Square. The building dates from 1473 and is the only surviving fragment of the former church, which was destroyed in 1755 as a result of an earthquake.

Church of Our Lady of Medicine

The museum is located in the former Old Town Hall at Plaza Blas Infante. It is home to over 400 exhibits from various periods, some of which may be as old as 100,000 years. A small clay figurine attracts the attention of tourists here. The "Venus of Estepona", as it is called, is probably 5,000 years old.

The museum can be visited free of charge. For more information, please visit: https://phc.estepona.es/

In 1972, a bullfighting arena was built in Estepona, designed by the architect Juan Moro Urbano. It now serves as a space for cultural events in the city. Traditional corridas are a rarity here. Regardless of the controversy that bullfighting arouses, the arena is worth seeing. It has a unique, asymmetrical design that stands out. Costa del Sol has no other like it. 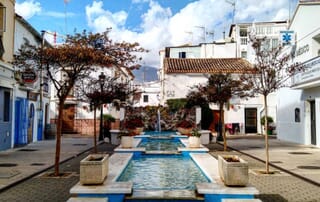 The mural trail and the other two themed trails in Estepona

In addition to fantastic gardens and monuments, Estepona, Spain has found one more way to bring beauty to the city, allowing artists to showcase their talents in its space. Tourists can come into contact with art in Estepona along 3 cultural routes:

While the old town is famous for its whitewashed houses, the modern part of the city boasts buildings decorated with multicolored murals. On the once-empty facades, artists are free to express their artistic personality and they do so by decorating the facades with colorful paintings that sometimes leave you stunned. One such image is "Estepona Bermeha!" by Peruvian Ana Cecilia Salinas. The 30-metre mural in the foreground depicts a red platform and in the background the wild landscape of Estepona, where Sierra Bermeja and Mar de Alborán meet.

A city sightseeing route that perfectly fits into the colorful and romantic Andalusian atmosphere. It leads through 33 boards with poems by national and international poets. Although a significant part of the exhibition is the poetry of Spanish artists, there is also a Polish accent. Among the foreign works is the poem "Nothing Twice" by the Nobel Prize winner, Wisława Szymborska.

Both Estepona Costa del Sol and the whole of Spain are famous in the world for their beautiful beaches. There are 17 of them in Estepona alone, some of them can boast of the Blue Flag, which is a distinction awarded annually to the best beaches in the world.

The largest, besieged by tourists, Estepona beach with powder-soft sand is Playa de la Rada, which stretches for about 2.5 km and is equipped with infrastructure conducive to blissful relaxation. It is the closest to the Old Town and starts on the eastern side of the marina. Along the beach, in the shade of palm trees, runs the Paseo Maritimo promenade, where many bars and restaurants serve seafood and fresh fish dishes. You can relax here for lunch or dinner, looking at the boats bobbing on the sea waves. You can also go cycling or jogging here. There are also volleyball courts on the beach.

Interesting fact: The marina is worth visiting on Sunday, because then there is a popular market with lots of stalls offering local handicrafts.

High level culture, beautiful, vast beaches, an authentically Spanish old town, Andalusian atmosphere, delicious food, tapas almost everywhere - this is Estepona Spain at its best. So if you want to enjoy the vibe of a small town with the comforts of a big city, this is the place for you.